Local Professional Cookery apprentice Chloe Gardner has taken first place in a national catering contest. The QHotels competition was designed to encourage their catering team to develop their skills, and to find a new summer dish for the group’s menus. The final was held on Tuesday 29 March at Crewe Hall in Cheshire, where Chloe was declared the winner.

Chloe’s culinary creation consisted of grilled mackerel fillet, served with smoked paprika courgette and parmentier potato, and accompanied by a white bean and rocket salad and chilli and lime salsa. The four finalists had to prepare and cook their mouth-watering masterpieces in just 45 minutes, and were judged on their imagination and on their culinary and presentational skills.

18-year-old Chloe, from Barford in Warwickshire, began her Level 3 Apprenticeship with Stratford-upon-Avon College in November 2015 and is employed as a Commis Chef at Stratford Manor, had already emerged victorious from the preliminary rounds – firstly being questioned over her choice of dish and preparation method, followed by a timed cook-off in February at Norton Park in Winchester.

Chloe is understandably thrilled at her success. “I still can’t believe I won. I love being a chef – thinking up interesting menus and creating new food combinations. I know I’m still learning, so to have my dish win is amazing. Both Stratford Manor and the College have been really supportive throughout the whole competition, and I’d like to thank them for helping me.”

Bryan Anderson, Catering and Hospitality Team Leader at Stratford-upon-Avon College, commented, “I’m delighted for Chloe. She is an extremely talented chef – technically skilled and very creative, especially considering her young age. She thoroughly deserves her win and we are all extremely proud of her. After this magnificent achievement, there is no doubt that she will have a very successful career as a chef.”

Chloe will now see her winning dish featured on the summer menus of every hotel throughout the QHotels group. As her prize, she won not only a beautiful and very expensive set of cooks’ knives, but also a two-week internship at award-winning chef Simon Rogan’s restaurant “The French”, situated in the Midland Hotel in Manchester, where she will stay free of charge. A celebration party was also held in her honour by her colleagues at Stratford Manor, who presented her with gifts and a bouquet of flowers.

Chloe dreams of achieving a Michelin star and she is certainly going in the right direction. 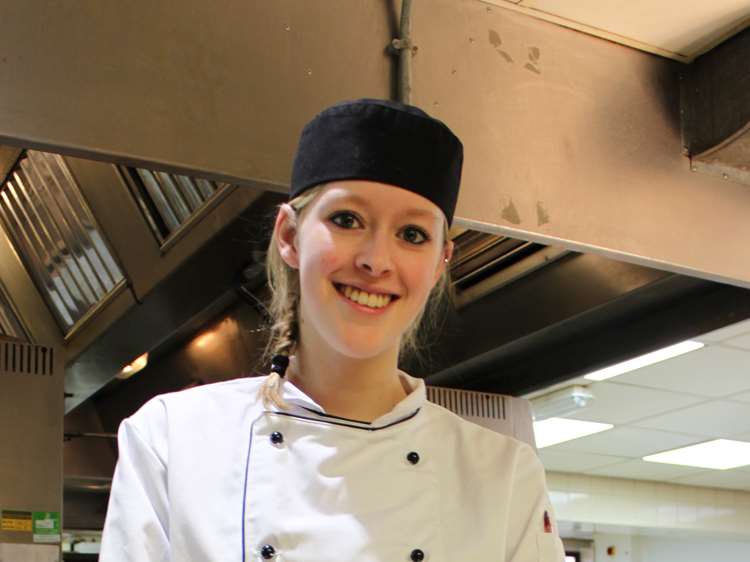