A former Stratford-upon-Avon College Catering student has won this year’s prestigious Roux Scholarship. Having battled it out against some of the best young chefs in the country, 27-year-old Harry Guy, originally from Leamington Spa, was earlier this month named Roux Scholar 2016.

The final of the contest was held on Monday 4th April at Westminster Kingsway College in the heart of London, with Harry being announced the winner at an awards presentation which took place the same evening at the Mandarin Oriental Hotel in Hyde Park.

The six finalists were asked to create and present Norfolk black chicken en croûte, with cardoon gratin and a tarragon sauce. Although the dish would seem relatively straightforward, it is in fact technically challenging, with several individual elements to be correctly balanced and cooked to perfection. The chefs had three hours to prepare and cook the dish in front of the judges – who included the world-renowned Alain and Michel Roux Jr and TV favourite James Martin – and were under even more pressure as they were not given the recipe and ingredients until 30 minutes before the start of the competition.

Harry made up his mind at the age of 14 that he wanted to become a chef, while working in a kitchen as a pot washer; so, after attending North Leamington School, he decided to study at the College for two years on its Advanced Culinary Skills course. “I knew I wanted to study at Stratford-upon-Avon College due to its great reputation for hospitality and catering courses. I have so many great memories from my time there. My lecturer Alan Deegan was a huge inspiration and became a mentor to me – he is the reason I wanted to do so well in the industry. The most important thing I learnt at the College was discipline. Tony Davies, another of my tutors, was excellent; he was always very firm but fair and this sets you up for exactly what you need in the real world of busy kitchens.”

Currently Support and Development Chef across the Eden Hotel Collection, Harry has previously worked at the Michelin star restaurant at Malory Court Hotel in Leamington Spa and at the famed L’Enclume in Cartmel, Cumbria – where he was mentored by Mark Birchall, himself a previous Roux Scholar – and has also realised his dream of developing his skills by working in France. He is no stranger to the competition, having last year made it through to the regional finals.

Harry is understandably delighted as his success: “To win the Roux Scholarship is a massive achievement. It’s something I have worked very ha

rd towards and to finally accomplish it feels amazing. To be named a Roux Scholar and to be on that elite page of 32 other chefs is incredible. It’s a gateway to a great future in my career.”

Tony Davies, Catering Lecturer at Stratford-upon-Avon College, commented, “Harry was always a keen student wanting to learn as much as possible; you could tell from the start of his time at College that he would go far in the catering industry. To see an ex-student progress well in his career is a proud feeling and I wish Harry all the best in his culinary dream”.

In addition to invaluable advice and support from the Roux family, Harry receives £6,000 and the experience of being trained for up to three months at a three star Michelin restaurant anywhere in the world. We are sure he will make the most of this opportunity.

Well done @harryguychef Roux Scholar 2016 Find out about the final & what the judges said https://t.co/DzjG001Z7H pic.twitter.com/te0EcVJ5kb 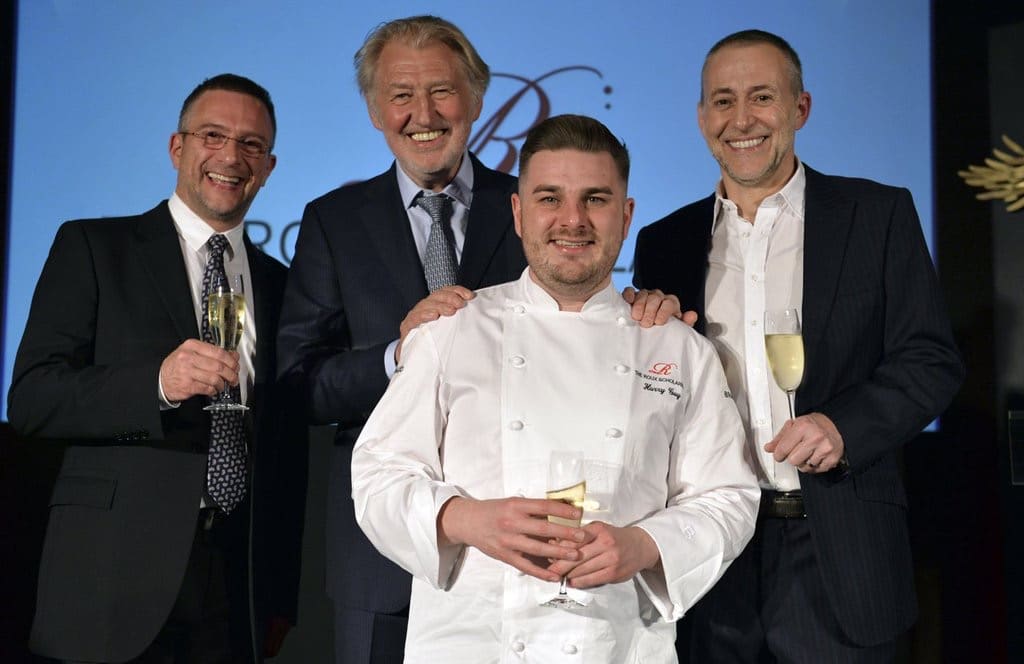