Stratford-upon-Avon College was delighted to welcome back alumnus Michael Rivers when he returned to campus to perform his new play Love Lab.

Together with fellow actor Harriet Barrow, former Acting student Michael staged a one-night performance of the play for the public, then put on a students-only performance the following day and led a workshop for the College’s Performing Arts learners in which the students were given guidance to create their own work.

Love Lab is a two-hander inspired by an experiment conducted by psychologist Arthur Aron, in which he devised a series of 36 increasingly personal questions to see if they could create a sense of intimacy between total strangers. The play portrays a reality TV show watched by millions in which two people are locked in a room for one week, with Professor Aron’s 36 questions put to them at various times throughout in order to influence their relationship and ultimately make them fall in love.

Michael and Harriet have put on Love Lab in various London venues, including a sold-out one-week run in the West End. Michael commented: “The play has been incredibly well received. The feedback has been that it’s so relevant and current.” 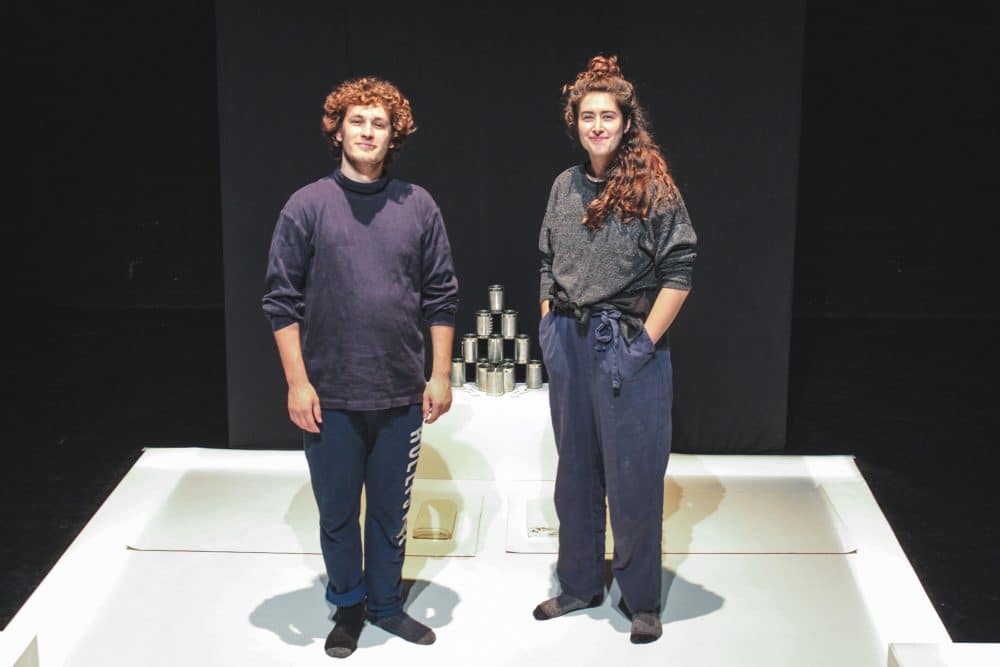 According to Harriet, who plays the extroverted, social media-savvy Livia, it deals with “the pursuit of true love in the digital world”; while Michael, with the role of the old-fashioned and technology-wary Perry, summed it up with “It’s like Love Island meets Black Mirror. It asks do we really know how technology is affecting us. Having a conversation by typing on your phone is now much easier than actually talking.”

Discussing his preparations for the role, he explained: “My character is very anti-technology so I tried to withdraw from social media. I discovered that I felt like I’d been left behind which is awful because obviously I hadn’t at all. I really wanted to feel what the withdrawal from social media addiction is like.”

Claire Morley, Assistant Head of Performing Arts and Music, was delighted that Michael and Harriet chose to bring the play to the College. “It’s always a pleasure to welcome back one of our former students and to see how they have developed. In both his magnetic performance and their impressive workshop, Michael has demonstrated to our current students what they themselves could achieve.”

Michael studied at the College for three years before progressing to East 15 Acting School and is grateful for the training he received at Stratford. “It prepared me wonderfully for the industry and I think that the teachers are second to none – they are very inspirational people.”

And what advice did he have for the students? “Being independent. They can all have a place in the industry if they work for it. It’s not going to come and find you though. I want to show them that they can create their own work.”