SEEN is produced by the College’s HND Creative Media students and broadcast on Big Centre TV. It aims to throw a spotlight on Stratford-upon-Avon, Warwickshire and the College, and to showcase the students’ talent and creativity.

The College was delighted to receive support recently from the legendary Nick Owen, veteran TV presenter and newsreader, best known for presenting the breakfast television programme TV-AM and local news show BBC Midlands Today, which he has fronted since 1997. Nick came into the College specially to appear on the programme and was interviewed about his career and experiences by the show’s two presenters, Caitlin Setterfield and Callum Norledge, both HND Creative Media students at Stratford-upon-Avon College.

The episode was broadcast on Monday 16 November and will be repeated on Saturday 17 November at 7pm.

After filming the show, Nick commented on the College’s studio and the quality of the presenting: “I was most impressed by the up-to-date facilities and the professionalism of the students. By producing a real series which is broadcast on British television, the students are gaining the best possible training and experience, both behind and in front of the camera”. Referring to his own career, he added: “It was a great pleasure to offer my support and encouragement to the next generation of television presenters!”

The presenters were thrilled to welcome Nick as their guest on the show. Caitlin said: “It was a real honour to be able to interview such a consummate professional and true TV legend. We thought we would be in awe of him but he was incredibly kind and supportive.”

Callum was equally enthusiastic: “It was great having the opportunity to meet someone like Nick, who has so much experience and knowledge and is willing to share it. We both feel we have learnt from the master himself!”

The SEEN series is being shown on Big Centre TV on Freeview channel 8 and Virgin channel 159 across Birmingham and the West Midlands, and can be seen on Monday evenings at 8.30pm with a repeat on Saturdays in the prime-time 7pm slot. 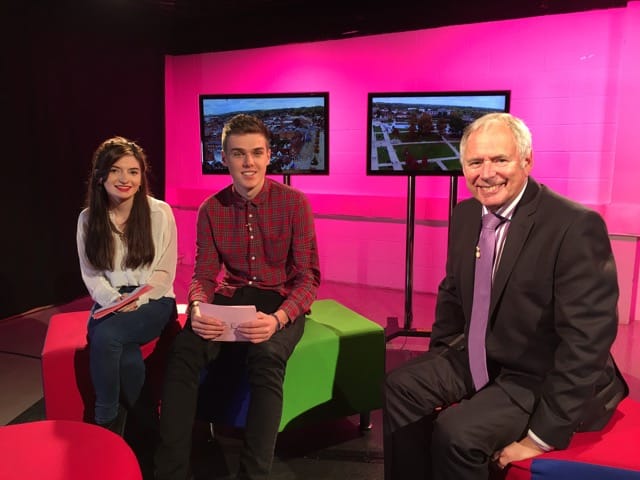