An award-winning Warwickshire chef and restaurateur is determined to provide greater employment opportunities for young people in rural communities, and has recently rewarded one of his own former apprentices with a much-sought-after full-time post.

Nick Deverell-Smith, Head Chef and proprietor of boutique Cotswold pub The Churchill Arms in the village of Paxford, decided to hire a Professional Cookery Apprentice through Stratford-upon-Avon College in October last year. Wanting to offer greater opportunity to aspiring chefs in rural communities, Nick explained, “I was an apprentice myself. I had the opportunity to train at Simpsons in Kenilworth, in my opinion the best restaurant in the area, under some fantastic chefs such as Glynn Purnell. I think there’s no better way than learning on the job.

“I always wanted to own my own restaurant. When I left school I wasn’t very confident at all but here I am now. To be able to give that opportunity to other young people is hugely rewarding.”

Nick, who won Junior Chef of the Year in 2000 and has worked under both Gordon Ramsay and Marco Pierre White, turned to the College’s Work-Based Learning Team to arrange and advertise the apprenticeship. “When I opened The Churchill Arms, I got in touch with Stratford-upon-Avon College to perform some catering demonstrations for the students, and I was very impressed with the standard of chefs they were producing. So they were the obvious choice when it came to choosing an apprenticeship training provider.”

The apprenticeship was eagerly snapped up by 17-year-old Matthew Young. Under the expert guidance of Nick and his team, Matthew’s skill and confidence grow by the day and he has developed into a first-class commis chef. Reflecting on his training, Matthew said, “I definitely feel I learnt faster than I would have on a full-time course. I also got to practice my skills a lot more often. I was able to send my work to a customer and get their feedback instantly which was very helpful.”

The experience of developing an apprentice with the College has proved highly beneficial to Nick. “An apprentice needs time and patience but Matthew runs a whole section for me now. I can actually take a day off work now which wasn’t possible before!”

“I’m looking to recruit at least one other apprentice which will reinforce my team even further. Now Matthew will be the gold standard for any new apprentices I have. He’s evidence of how much you can achieve if you really put the hours in.”

Apprenticeship Team Leader Bryan Anderson is very impressed by Matthew’s achievements. “For any young chef confidence is key. I’ve seen Matthew grow and adapt and now you can see he feels much more self-assured. Matthew’s in charge of all cold starters and desserts and already has ambitions to progress further under Nick’s expert guidance.”

The Churchill Arms brings a contemporary feel to a 17th Century pub, with a ‘Best of British’ theme, and makes extensive use of local produce, sourced daily from the surrounding countryside. For more information, please visit the website www.churchillarms.co.uk 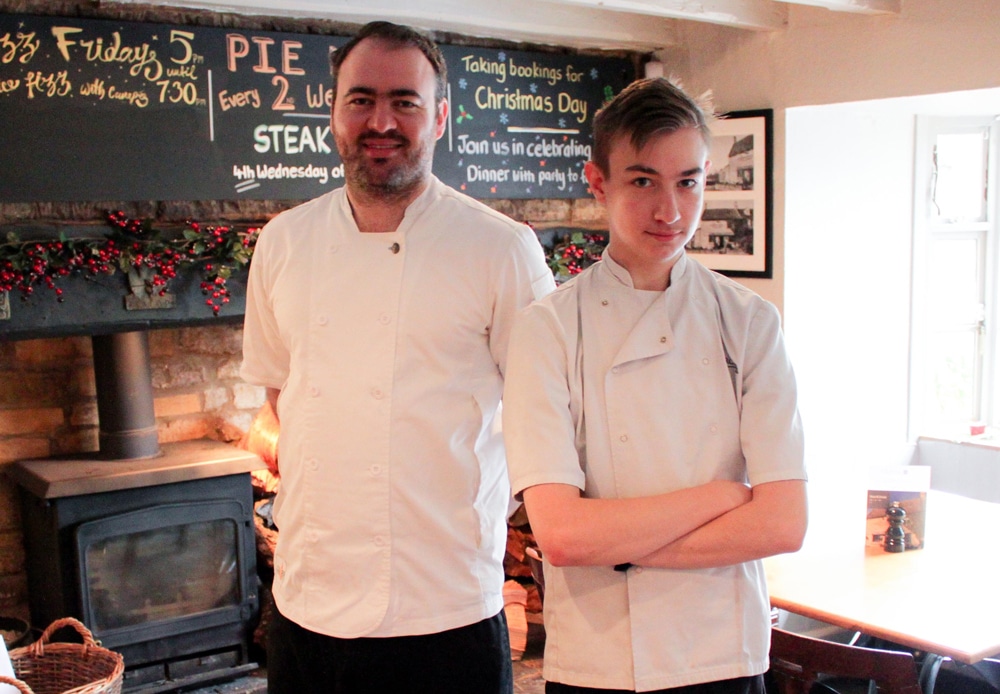